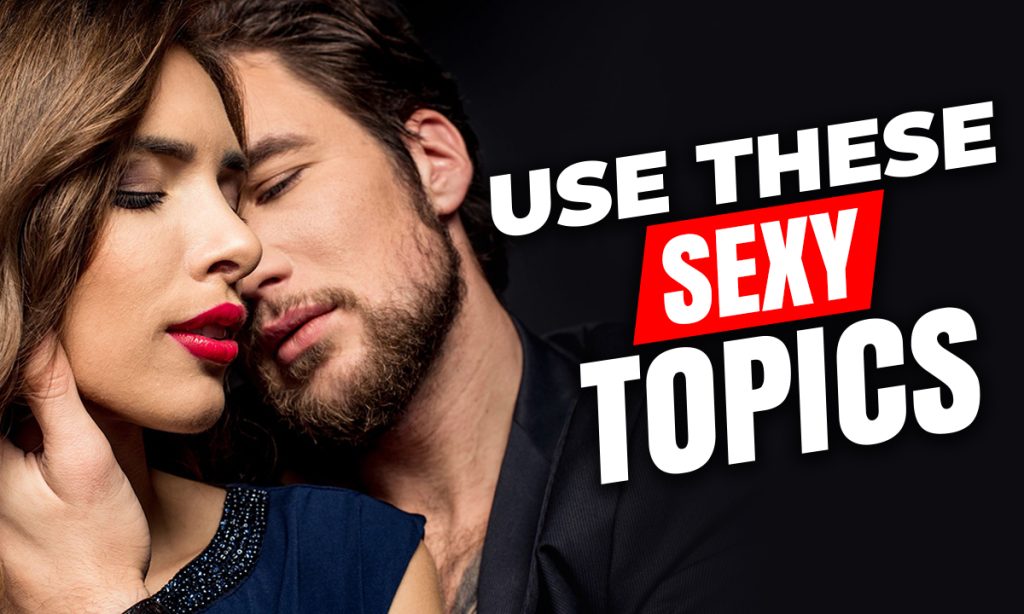 Whether you’re on a date, at the bar, or with a woman in any situation that you’d like to take to an “intimate level,” knowing how to transition into a flirty and sexual vibe is crucial.

Much of the “transitioning” will be subtexual. This means you will use your body language to transition the vibe; however, verbal cues can also help establish the vibe, as well.

While I don’t advocate following a “script” for taking things flirty and sexual, I’ve included some example quotes for successfully transitioning into a sexual vibe.

The next time you’re interacting with a woman and want to take things to the next level, keep the examples below in mind.

When: Bring it up over drinks, using alcohol as the buffer.

Quote: (Raising glass to toast your date) “Did you know that if you don’t look someone in the eye when you make a toast, you’ll have bad sex for 7 years? (Let her respond)

Why this works: What’s great about the “7 years of bad sex” toast is that you imply the two of are already going to have sex, before you ever have it.

By just introducing the topic of sex, you plant the idea in her head. Yet, by making it fun (with the toast), you keep yourself from coming off overly vulgar or offensive.

When: You’re talking to a girl and have rapport, using a story as the buffer.

Quote: “I had an interesting conversation yesterday. I was talking to my friend Ashley and she was telling me about this failed date she went on. She went out with this guy she really liked. The date was going great, but this guy came on really strong. It’s not that my friend didn’t like it, she was saying they were at the bar, and he was gently kissing her neck, pulling her hair, massaging her neck. But she said it was too PDA, it weirded her out!

Why this works: This is a money way to take things sexual. Since you indirectly bring up a sexual topic, you have license to vividly describe sex to her, without making her feel awkward or offended.

I especially like to bring up a “failed date” story because it gives you social awareness bonus points (i.e., you understand why PDA is inappropriate).

When: Right before you want to take things back to your place.

Quote: “You look fit. Do you do yoga? My friend actually just got me into it, and I’m sort of on this yoga kick. What I like about yoga is it’s not just exercise for your body. It’s sort of philosophical too, even sexual. In fact, I was just learning some tantric yoga sex stuff. Really crazy! But wow, we shouldn’t talk about it here.

Why this works: This is the classic “bait and switch” that so aptly injects sexual tension into an interaction. You bring up “tantric yoga sex stuff” and then refuse to elaborate on it.

Who doesn’t want to know more about tantric yoga? I’m curious about it and I’m the one who made that quote up!

I have tattoos and I also think girls with tattoos are sexy, so this one usually works pretty easily for me, because it comes up naturally in conversation.

That being said you can also use this trick if you or the girl you’re chatting up have piercings, perhaps in places other than your ears.

Point out her tattoo, and ask her about it. You’ll undoubtedly get a story, and hopefully encourage her to a show a little more skin (getting her to comfortably open up to you is a good thing), and that’s usually a natural invite for you to touch her.

I.e. if she’s showing you something on her arm, you can take her by the wrist and examine it.

Of course, use good taste and social graces here. Skin on skin is the objective, but don’t be an overly aggressive creep.

Usually this whole process follows the pattern of “skin reveal, skin touch” and creating that kinetic energy will almost escalate things for you, but also while moving the topic of conversation on to “your bodies”.

If you’re at a club, bar or party, you’re perfectly queued up to start talking about other wild nights.

You can get a little playful with her here and see who has the more wild story.

Ultimately though, you want to get her talking about times she’s gotten sexually wild. It doesn’t have to be anything too crazy, but skinny-dipping stories, the time she did body shots or made out with her girlfriend will move you in the right direction.

Once you start to get some of those kinds of wild stories out of her, you can escalate further.

Start to swap sex stories. The wildest place you’ve ever had sex, that time somebody (almost) walked in on you, how bad your first time was etc.

The logic behind this one is simple; you’re putting sex on her mind.

Another way to branch off of her wild stories is start to playfully question her a little bit, and then see if you can create some kind of sexual fantasy between the two of you.

Then shake hands on it like it’s an actual pact. Then, start working out the fantasy. Who should we ask to join us? Should it be one of your friends? Should we try to pick up a random? Etc.

You can laugh it off, “What? I thought you were a badass!”

Flirting Topic #8: Accuse her of being a badass.

This seems pretty tame compared to talking about threesomes, but it’s a neat little trick that legitimately encourages women to want to pounce on you.

And it’s super easy to do. Here’s all you have to say.

You can accuse her of this based on her fashion, tattoos, wild stories, whatever, and then go on about it a little bit.

“I actually think you could kick my ass, it’s intimidating. But also pretty sexy.”

When you say that, you have to have a big smile on and obviously not look intimidated at all.

It’s a great statement because what you’re doing is letting her know that you think she’s sexy, while also telling her it’s okay to be sexual around you.

You want her to be sexual around you. You like her wild side and want to see more of it.

Most girls really do want to cut loose sexually, but they’re looking for the right guy to do it on.

Accusations are always perceived as “takes one to know one”, so by you deeming her a “badass”, she automatically assumes you are too, and are therefore worthy of her sexual attention.

As with everything I write, pickup isn’t a grand duel with flashy game and over-the-top antics; instead, it’s what I call “distilled normalcy” (just made that term up!).

By “distilled normalcy” I mean you act “like yourself” and in a normal way, but with the most potency.

You have the ability to attract gorgeous girls with your genuine personality; you just need to learn how to bring out the best pasts of that personality and understand how date tactically.

Using conversation topics to subtly transition into a sexual vibe is an example of “tactical dating.”