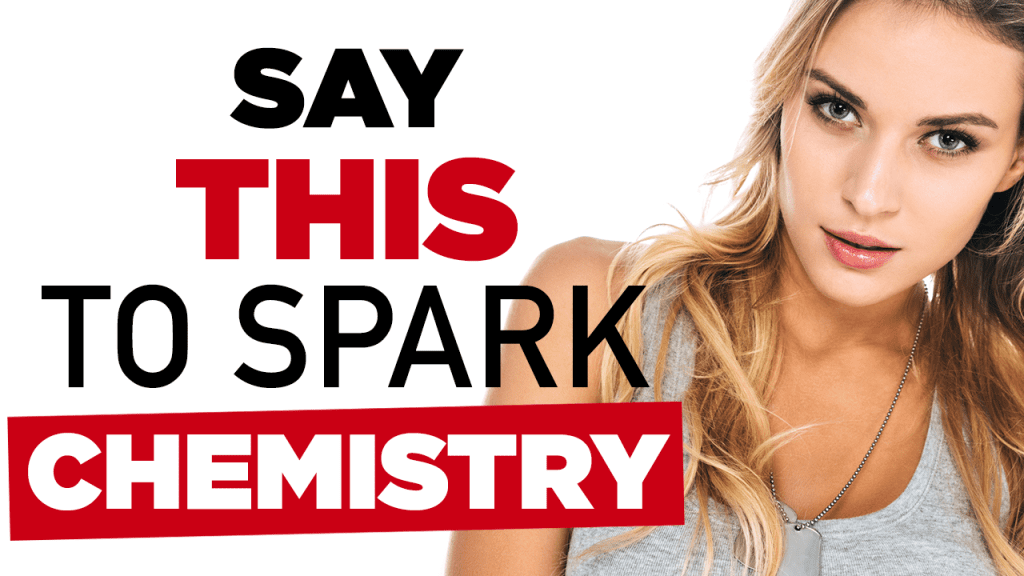 There’s a vibe that Bobby and I call the “flirty, funny, touchy-feely vibe.”

That’s the vibe where you know it’s on with a woman.

Whether you’re on a date or talking at a party, it’s that moment where the attraction clicks into place and you realize it’s mutual. Its the point where you both realize there is chemistry between you and her.

Women can’t help but getting sucked into this type of conversation, so we gave it a nickname: “chick crack”.

In this article, we’re going to give you five examples of “chick crack” to get you to that vibe.

You can even use these with your ex-girlfriend or to get out of the friend zone.  While many guys mistakenly think they need to try to recapture the past with an ex, Rob and I tell them: “forget everything in the past and introduce a new flirty vibe between you.”

These techniques should serve as baselines to get you to that level.

Chick Crack #1: Get Her Opinion on Something Scandalous

To help you understand what I mean by this trick, let’s start with an example of it.

So, there’s a trend on TikTok where there are two girls. One girl says, “He’s a six, but…” and introduces some trait about the guy that makes him more attractive, causing the other girl to raise his attractiveness number.

The first girl might say, “He’s a six, but he’s got a really sexy wrapped arm tattoo.” Then the second girl would exclaim, “Eight!”

In some of them, the guy gets knocked down a level based on something unattractive.

How to Use This Trend to Flirt

Now let’s say you’re talking to a girl on a date. Ask her, “Did you see that TikTok trend? Give me some examples of what would bring a guy up or down.”

It allows her to come up with something.  And for the two of you to laugh about it.

Not only does it let you get to know her better because you’re hearing about her taste, but it’s also a funny, scandalous thing to say.

You can lead her with an example that will allow you to communicate some of own standards, too. You could tell her, “She’s a 10, but she texts me goofy pictures every morning and, ah, drops her down to a six.”

Chick Crack #2: Make a Bet with Her

Back when I worked at a traditional office job, I saw this girl in the break room who I thought was very attractive.

I knew not to be the creepy guy at the office who hits on all the women aggressively, so I didn’t hit on her like a would at a bar or nightclub.

Instead, I walked over and playfully made a bet with her about playing tic-tac-toe together. It evolved into the tic-tac-toe world series.

It was an under-the-radar way to flirt with her.

We came up with the stakes for the competition and she ended up saying, “If you win, I’ll cook you dinner.”

All of a sudden I became the tic-tac-toe supreme master, carefully considering each move. We began a rivalry that went on for days, meeting in the break room to play.

It sounded like a silly thing on the surface, but the subtext was that there was sexual tension.

We were in a situation where it wasn’t appropriate to say, “You look great, let’s grab a drink,” so we were flirting and getting to know each other under this pretext of this goofy bet.

Thumb wrestling is a great way to make a “bet” with a woman.

A good time to bring it up would be if she asks you something like, “What’s your skill?”

Tell her, “The only skill I have is I’m the master at thumb wrestling.”

She’ll say, “Really?” and you tell her, “I’ll give you a head start and still beat you.”

We call this “competitive flirtatiousness”.

Back in college, beer pong was an amazing way to flirt with a girl, because you could be competitive to the point of distracting her during her turn.

Bowling is another good one. Tell her, “If I get a strike on this one, you’re going to give me a back massage.”

It doesn’t matter what you say. The important part is that you and she have a back and forth together. It takes you to that flirty vibe.

No matter how much people try to break down gender, there’s always going to be certain gender stereotypes.

The stereotype is that men are big and strong while women are caring and nurturing.

To create a flirty vibe, flip that on its head. Jokingly re-frame something she’s just done and tell her she’s taking on a masculine stereotype.

For example, if a girl gets a little combative or feisty, say, “Oh man, you’re a tough guy. I like that. I’m going to make you my new bodyguard.”

Not only does the gender stereotype tactic create flirtation, but it’s also a good way to deflect a test that a woman might throw at you

If tries to challenge you to take more power in the interaction, instead of getting offended or arguing, give her the compliment that you like how feisty she is and she’s on track to become your new bodyguard.

Bobby and I once took our girlfriends to Costa Rica. When there was a problem at the hotel, the ladies started complaining that we weren’t doing enough to fix it. We ended up cracking them up by telling them, “You girls walk up there and get it done. You’re badasses. You guys are totally gonna scare the hotel staff.”

A lot of guys are afraid to accuse a woman of something.

They think, “I don’t want to rock the boat too much.”

But throwing out a playful accusation creates a nice framework for you and her to flirt.

I emphasize, this must be a PLAYFUL accusation. You’re not going to simply accuse her of something serious because that could go south very quickly.

Let’s say she’s drinking an appletini (or whatever she’s actually drinking). Tell her, “Oh shit, my mom warned me about women who drink appletinis. I don’t know about this. I don’t know.”

She’ll be sucked into responding. She’ll ask, “What did your mom tell you about girls who drink appletinis?”

You’ve now set up a fun, flirty dynamic. You can go back and forth with her, teasing each other.

To do this right, simply observe something about her and assign a quality to that.

Let’s say you observe that she wears hoop earrings. You can remark, “Oh man, girls who wear hoop earrings are evil. I’ve had some experience with that. I know how you guys are.”

The more ridiculous, the better, so she knows you’re joking around with you needing to explain it.

Regular conversations usually keep you both stuck in being logical, but bantering about these accusations allows you both to show off your fun personalities.

When you get really good at stereotyping, you can actually have fun with this.

Bobby always liked Latina girls and knew a lot of Latina stereotypes. So throughout his conversations with a Latina woman, he would throw in comments like, “I know not to say that around a Latina because I’m going to get a shoe thrown at my head.”

He made it playful instead of offensive as he played on the idea that “Latinas are hot tempered.” They would laugh because they knew he wasn’t espousing that as his belief, he was playing the role of a guy who naively believed a stereotype.

Just be sure not to use a negative stereotype.

The idea of a Latina being “hot tempered” is about as close to negative as you can go, and it works because there’s a certain aspect of being hot tempered that is empowering. You would never want to use a purely negative stereotype.

This is the easiest one of all five techniques. It’s a high-five that you make sexy.

To do this, look for a moment when she says, “I like that band, too” Or “Yeah, I agree that movie is awesome.”

Now, when you do a normal high-five with your buddies, you slap palms and that’s that. But that’s not what you’re going to do here.

How to do the “Sexy High Five”

In a sexy high-five, you slap your palms onto a woman’s palm… then curl your fingers together.

Hold it for a second. Let that moment hang there for a second or two. You can even do a little shake. Then make sure you’re the first one to break that contact and pull your hand away.

Hand contact is one of the most sensual, attractive forms of touching that you can do with a woman. She’s going to get a jolt from it.

It’s technically G-rated… but at the same time, she’s going to be thinking, “Man, I must really like this guy. I have such strong chemistry with him.”

She’s not necessarily going to know why she has those feelings, but she’s going to realize she’s having them.

But by pulling your hand away right after you emphasize that point, you never let it get creepy. You never seem weird. You leave her wanting more, which is exactly what you want to do when you’re touching a woman early on.

Recap of the 5 “Chick Crack” Technique

To create the flirty funny touchy feely vibe that turns a woman on, make sure to:

Inject Personality Into Flirting with Women

If the fun & flirty vibe doesn’t come natural to you, we’ve got dozens more techniques just like this to help you get there.

Bobby and I were not naturals, either, and it took a lot of trial, error, and watching other guys to see what worked and didn’t work. We’ve put together a giant collection of techniques that we’d like to share with you. You can download it at the link below.