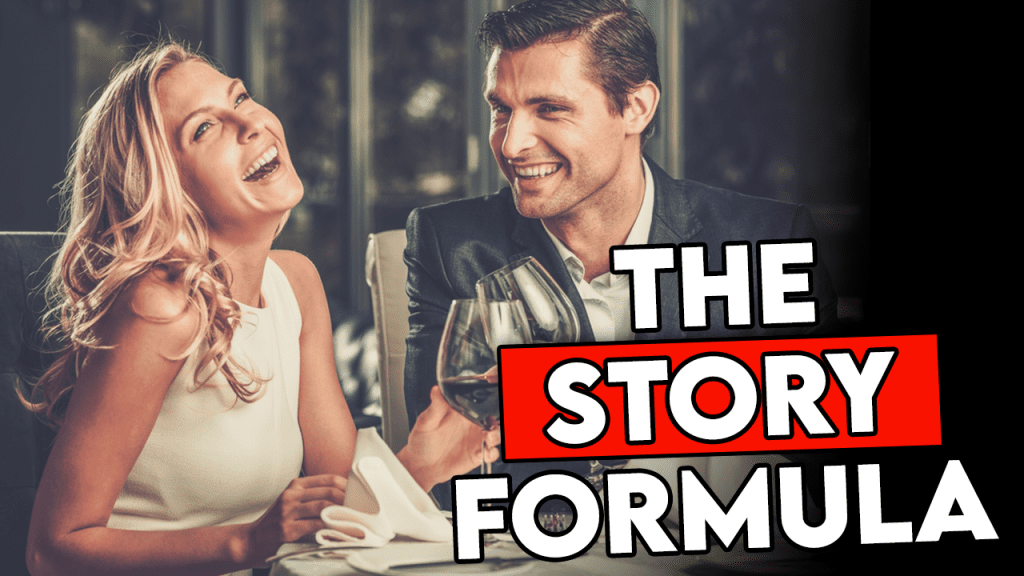 It’s no secret that a great story can captivate a woman’s attention while stoking her attraction for you.

This is because you’re guiding her through a strong range of emotions.

Nothing too bold, nothing too crazy, yet the “payoff” is the same as if you’d pulled off a dramatic and audacious move.

A great story can electrify a conversation, supercharge a date, and even reverse a woman’s opinion of you.

The caveat, however, is this: you have to deliver.

Telling a weak or boring story can easily backfire, making you seem boring and uncool.

Lucky for you telling a great story isn’t a Homeric feat.

In fact, learning to tell a “good story” is as simple as learning to cook a simple dish. Like cooking, you just need to select the right ingredients, combine them in the proper sequence, and serve!

Story Step #1: Open the story with a broad topic and a specific moment

The essence of a great story is one that makes it easy for the listener to relate.

With women, “hot topics” that make for relatable stories are:

Essentially all these topics have two things in common:

To select a broad topic, simply focus on a moment in time that you vividly remember because it packs a strong emotional “punch,” and (ideally) has happened to the girl (or girls) you’re conversing with.

(Bonus points if the topic hits on something romantic/sexual.)

Once you’ve selected your “broad topic,” the next step is pulling the listener into the story by describing a specific moment. Really try to “paint a word picture” with your details!

Which of these stories would you rather hear?

There’s more visual detail to lets you “experience” the story. The more a listener can “experience” your story (and they’ll “experience” it if you describe specific sights, sounds, smells, weather, etc.), the more they’ll want to hear more.

Sprinkling in 2 or 3 details is more than enough. Don’t go overboard and feel like you need to describe EVERYTHING. Just pick out a few interesting tidbits (and if you’re ever stuck on what to pick, just go with the weather), and you’ll be fine.

Focus on a “topic” that made you feel emotional and you think the listener can relate to (and for women, think along the lines of romance/sex).

Then, begin the story by describing what happened with descriptive details (get them to “experience” what happened).

Some questions that might help you select descriptive details are:

Warning: Don’t go overboard with the details! Too many details can ruin a story and make it boring! As a general rule, don’t use any more than 3 details before you get into the “conflict” of the story. (Which you will learn in the next step!)

The lifeblood of every great story is ACTION.

The formula of ANY story is this: someone wants something > they don’t immediately get it > a conflict ensues > person either gets what they want or they don’t.

Think about every great story you’ve ever heard, movie you’ve ever seen, or book yo’ve ever read, they ALL follow that formula!

Yet, sadly, most people who tell other people stories don’t understand this formula! Think back to a story that someone told you that bombed.

For me, I remember once someone told this story:

“Oh man, I was a tattoo parlor the other day, and then this super hot chick walked in. Everyone in the tattoo parlor just stopped and stared at her. And then ‘get this’ a big, muscular guy walked in after her and it was her boyfriend!”

When the guy told this story, everyone just remained silent, thinking there was more to the story.

Finally, the guy said, “And that’s the story. This girl’s boyfriend was a huge muscular guy!”

See how terrible that story was? Needless to say, everyone started making fun of this guy for telling such a shitty story!

This story might have been worth telling if there was a conflict.

For example, imagine if someone had hit on the girl and THEN her muscular boyfriend walked in. Now there’s a conflict!

Who knows! But at least when there’s a conflict, it engages the listener!

Failing in inject some sort of conflict into a story is why so many stories fail.

Even if it seems there is no conflict, try and find even the slightest struggle, and amplify it!

For example, to return to the “losing virginity” story, even if it happened without any “struggle” from the girl (which hopefully is the case!), find conflicts elsewhere:

All these “struggles” fit into the “story formula.”

Remember: in any good story, someone WANTS something and they DON’T immediately get it.

If you have those two elements, you have a conflict!

Engage the listener by injecting a conflict into your story.

To create a conflict, you only need things:

Often your goal will align with the story topic. So, for example, if the topic is “when I lost my virginity,” the goal is obviously “having sex.”

Warning: Don’t neglect this step or rush through it.

The entire point of telling a story IS the conflict. Feel free to spend time developing both the goal and the obstacles. Really make the listener FEEL how badly you wanted to accomplish this goal, and then REALLY amplify the obstacle that prevented you from achieving that goal.

Most of the emotion a woman will feel from your story comes from this step, so really work on getting good at creating tension in your stories. Absolutely pepper in descriptive details (like you did in STEP 1) to get your listener to “experience” the conflict.

“When I was at my prom all I wanted to do was impress my date. I spent weeks practicing dance moves and I went all out on the limo and everything. Spent all the money I’d made as a busboy for this one night! I thought everything was going as planned until the last song when another guy asked her to dance!”

Story Step #3: End with a “resolution” to the conflict and “cash in” the moral of the topic

Once you’ve built up your conflict, women will usually be on the edge of their seat, wanting to hear how to conflict ends.

Even in the short example from STEP 2, you’re probably wondering, “Well did she dance with the guy? Did you do anything, or did you just let it happen?”

Even if you didn’t “succeed” in your goal, you should tell the ending.

In fact, the BEST stories are usually ones where the goal isn’t achieved, but something else awesome happens instead.

Example of Ending Your Story

For example, to end the story from STEP 2, consider this:

“So my prom date agreed to dance with this asshole, and I was enraged. But, as the final song started playing, I realized something profound that still sticks with me to this day. Listening to “Hanging on a Moment” by Lifehouse, which was the last song, I realized I was an idiot for trying to impress this girl with a big limo, white suit, dance moves. If this girl would choose some deuce bag over me, then I’m better off without her. I left my prom knowing that I’d never waste my money trying to impress other people ever again.”

Notice how the goal of “impressing the prom date” was lost, but something better was won: an attitude.

Please note: these examples aren’t meant to demonstrate good stories. They’re simply examples of how these “story ingredients” work together.

Ending your story is very important. Another bad story trap is telling a run-on story that has no point and no end.

In every story, there should be a definitive end. And that end should be “signaled” to the listener by voicing the “moral.”

When I say “moral of the story,” I don’t mean some grandiose life lesson or philosophical truth.

A moral of a good story can be as simple as:

By articulating what you “learned” you end the story gracefully.

Ending on an “abstract” note is especially useful when using storytelling to attract women because it gives her an opportunity to “riff” on that topic.

When you end your stories by saying what you “learned” or “understood” from an experience, it invites her to tell her story about a similar experience.

In closing, stories aren’t just a retelling of something that happened or a neat collection of words. Wars have been fought over stories (e.g., “killing in the name of God”) so they certainly can help you score some points with a hot girl.

Just keep the 3-STEP system in the back of your mind the next time you find yourself sitting across from a hot woman and let your story do the “heavy lifting” of attraction for you!

Bonus tip: smart readers probably realize that they can start honing their storytelling skills around their friends, family, and coworkers.

Only a fool would wait until a hot girl was standing in front of him to begin practicing his storytelling. Get good at telling your stories long before a hot girl is ever in front of you. This way, you’ll be rivaling Homer by the time you sit down for drinks with that hotty from the office!