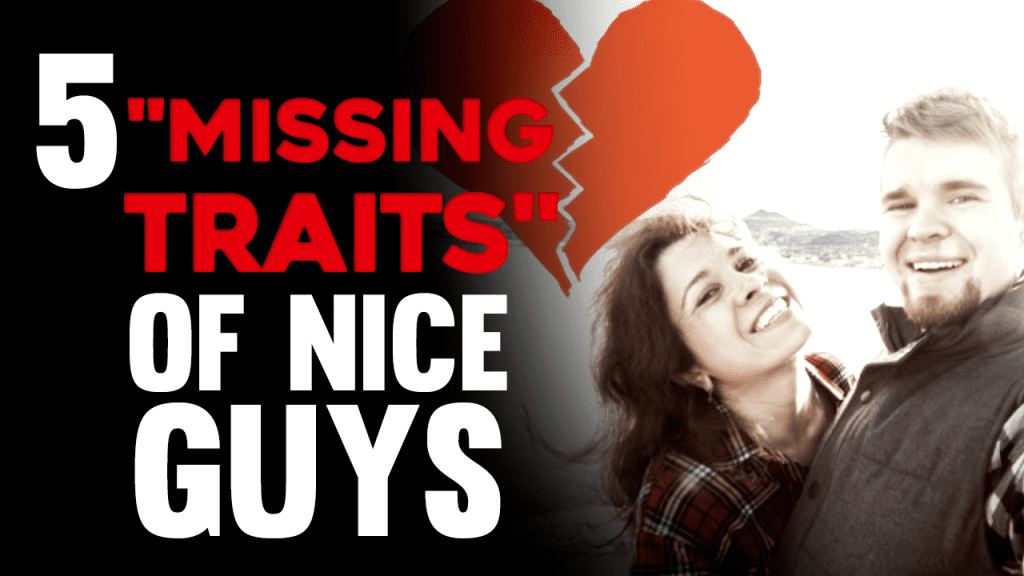 Many guys instinctively fall into a category referred to as “nice guys.”

When a woman rejects you and tells you, “You’re a really nice guy…” she says it like it’s a good thing… except that it’s usually followed with, “…but I’m not feeling it.”

The reasons that women don’t feel it with “nice guys” is because they’re missing five traits that women want from a man. Traits that a man must have to turn a woman on.

Here are the 5 traits that “nice guys” are missing.

“Nice guys” are afraid to fully go after what they want.

I recently watched a “nice guy” interact with a woman he’d been set up with. At the end of the night, he winds up going, “Hey, nice meeting you,” gives her a hug, and leaves.

He didn’t take responsibility for making something sexual happen.

He failed to fully go for what he wanted.

“Nice guys” do this all the time.

You need to have that killer instinct to go for what you want, be assertive, and close the deal.

A woman has to have a good time when she’s with you.

There must be an element of her thinking, “Wow, we really connect. There’s chemistry here.”

Chemistry happens on the playground.

Remember when you were out on the playground in the fourth grade with your childhood crush. You two were in your own little world, playing silly games together.

That’s where attraction takes place, and you should strive to give a woman that same feeling. We call that “Taking Her Back to the Playground.” It’s when the two of you are just engaging with each other and having fun.

“Nice guys” don’t understand this. They get a woman out on a date and instead of taking her back to the playground, they take her on a job interview.

They ask her, “What do you do for a living? How do you like your job? How did you get started in that?”

There’s no playfulness there. And without playfulness, there is no chemistry.

Ironically, when “nice guys” are hanging out with their friends, they tend to be fun, playful guys.

But around a woman, their serious side comes out and they don’t let their guard down. They’re stiff, formal, and come across as boring.

Sidestep the job interview questions and take her back to the playground.

In order to hold a woman’s interest, you need the ability to create anticipation.

If you study the romance novels, TV shows, and movies that women love, they’re all about buildup and anticipation of what’s going to happen.

Anticipation creates an emotional rollercoaster for a woman as she wonders what’s going to happen next.

There’s no tension being built up. You’ve removed the question, “When is he going to kiss me?” Because the answer is “never.”

Then the “nice guy” spills his guts and says, “I like you so much,” and that totally just ruins everything.

Because the answer is, “Yes, he’s already completely sold on you way too soon.”

When you meet a woman and decide instantly, ” I like her so much. I have to make her my girlfriend,” you’re going to move too quickly and diminish the suspense.

By keeping more options with women and having a fulfilling life outside of dating, you can naturally take longer to decide about a woman. This will better your odds of creating anticipation.

Remember that killer instinct that “nice guys” lack? A big reason for this is because they also lack certainty.

“Nice guys” are always second-guessing themselves and letting their insecurities seep through.

They’re hanging out with a girl the conversation is going well.

They have all this doubt and insecurity going through their mind.

On the other hand, a guy who’s good with women will think, “Of course she wants to kiss me. We’re having a good conversation. Why would she not want to kiss me?”

When the “nice guy” plans a date, he’s always worried. “Did I choose the right place? Is she going to like this place?”

They needily ask a woman, “Hey, is this restaurant okay? If it’s not, I could pick a different place.”

But what women really want from a man is certainty.

When you constantly seek reassurance from a woman, it comes across as insecure and needy.

When you doubt yourself, it makes her doubt you, too.

She’ll think, “Why is he so insecure? If he’s not sure that I should like him, maybe I shouldn’t.”

The #1 Most Attractive Trait

Everyone places a certain amount of value on themselves.

When we meet somebody else, we judge our value against theirs. It’s human nature.

When “nice guys” meet a woman that they like, they assign her more value than themselves. They automatically give her the position of higher status.

When you do this, you become a woman’s fan. You become the guy below her, looking up.

When she senses this, she’s going to look down on you because you’re training her to do that.

On the other hand, a guy that we might call a “player” is training a woman to see him as having more value than her. She senses this and begins to look up at him.

That’s why she chases him. Because we all chase things that we deem to have value.

Nobody chases “nice guys” because we don’t deem them to have value.

Money has nothing to do with it. There are plenty of rich “nice guys” who struggle with women.

Attraction is about the internal value that we place on ourselves. If you don’t give yourself a high price tag, a woman is never going to see you as worthy of chasing.

“Nice guys” fail because they lack these 5 characteristics that women crave:

If these 5 traits don’t come naturally to you, I hold a class a few times a week called “Three Steps to Status, Value, and Charisma.”

The class is about an hour long and is completely free.

Some of the guys that have already gone through this class said that they would have paid hundreds of dollars for this free class. It’s one of the most valuable classes you will go through.

Click the link below to register for “Three Steps to Status, Value, and Charisma.”