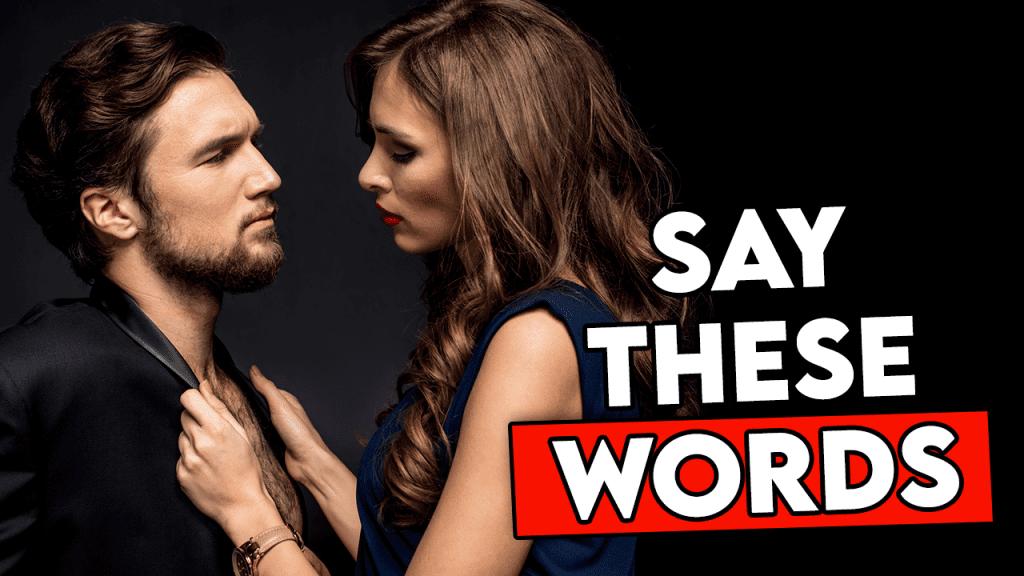 How do you turn a woman on

How do you get her excited for you, wanting you, feeling attraction for you?

Most guys try all the WRONG methods:

None of that works.

Women are turned on by feeling an emotional experience that triggers desire.

In this article, I’m going to give you five words that you can say to a woman that turn her on.

I’ve seen guys struggle for years because they don’t grasp how attraction works.

They don’t realize that it’s a reaction.

It’s something that kicks in that she can’t quite control.

And when you try to control that through things like complimenting her, or doing her favors, or trying to entertain her, it has the opposite effect.

Women are not turned on by niceness or compatibility.

What Feelings Turn A Woman On

The most attractive word that you can say to a woman is “no.”

It creates tension and challenge.

Asserting personal boundaries is an attractive quality of a high-value man.

When a woman sees that you respect yourself, it turns her on.

Saying “No” to Unreasonable Requests

Saying “no” could be in relation to her asking you something unreasonable.

Maybe you meet a new woman at a bar and after speaking for five seconds she says, “Buy me a drink.”

A nice guy will do it, because he’s so happy to be talking to her. He thinks buying a drink will win her affection.

But a woman will actually be more turned on by a guy that goes, “No, we just started talking. Let’s talk first and if it goes, well, I’ll buy you a drink.”

A lot of guys that are stuck in the friend zone are afraid to say no.

A woman might say, “Can you help me move furniture?” or “Can you drive me across town?”

When a nice guy says “yes,” she’ll see him as somebody that she can take advantage of.

But if you say, “I’m really not in the mood to move furniture, but I’d love to hang out,” that’s way more attractive.

The word “sexy” creates intimacy and sexual tension, but you’ve got to use it the right way.

If you just met a new woman or you’re in the first few seconds of a date and you say, “You’re sexy,” It comes across as disingenuous and a little too much.

Instead, say it when you two are back at your place after the date. Tell her how sexy she is.

As you get several minutes into a date, start slipping the word “sexy” into the conversation.

This one word differentiates a platonic conversation from a flirtatious one. You’re not going to use the word “sexy” talking to somebody you’re not interested in.

It’s a word that signifies interest, but you want to do it in a way that’s not overly aggressive.

Use it to build some tension, then let that tension be released.

You could say, “Hey, you have really sexy… elbows.”

That pause after the word “sexy” is to make her expect that you’re going to “breasts” or “legs” or “smile.”

While she’s expecting that, it’s going to build tension.

Then when you say “elbows,” it turns out to be a joke and the tension is diffused.

Because you diffuse the tension after a moment, you’re not creating so much tension that things get weird.

Yet you’ve also brought the tension and intimacy into the conversation to show that it’s not platonic. Because you wouldn’t speak like that with any of your guy friends.

“Trouble” is a fun word, because one of the things that turns women on is playfulness and flirtatiousness.

Back in college, most of my friends had crushes on this girl named Ashley. My friend James asked her out, but none of us expected him to get her. Not only did he get her, but they’re married now with kids.

One of the things that he did with her early on was he gave her the nickname “Trouble,” and he would always call her that.

That worked because it’s a little challenging and a little playful. It also signifies a “you and me” vibe. Plus there’s a saying: “He who names, owns.” It creates an extra intimacy.

You can do this, too.

You can say, “Well, the way you walk” or “the way you just flipped your hair” – make up any reason, then bring it home with, “I can just tell you’re trouble.”

It creates that flirtatiousness and intimacy that turn women on.

In evolutionary psychology, men are seen as dominant, big, strong, and masculine, while women are smaller and daintier.

Of course, in the job market, women are equal to men and should be treated as such. But in the realm of courtship and intimacy, most women enjoy taking on the feminine role in the relationship.

They don’t NEED a man to protect them, but they ENJOY having it because it builds feelings of comfort and being wanted. This leads to feelings of intimacy.

That’s why calling her “little” will stimulate her.

If you say, in a flirtatious way, “You’re so little,” or “You’re just a little girl,” it creates that intimacy.

It’s an innocent word that creates a very flirtatious undertone.

When you’re first hooking up with a woman, there’s a moment where she takes off her high heels.

You may catch her looking up at you, showing you that she’s little.

When women want to turn you on, they accentuate their femininity.

So when you tell her, “You’re so little. Come here,” you’re validating her femininity in the right context… and creating intimacy.

The f-word I’m talking about here is…

One of the feelings you want to create in a woman is challenge.

You want her to think, “What does this guy think of me? What does he want?”

Let’s say you’re doing all these other things. You’ve told her “no,” used the word “sexy,” nicknamed her “Trouble,” and called her “little.” Now there’s a flirtatious vibe.

Then you throw in the word “friend.”

Let’s say you’re about to meet up with some other people. You tell her, “You’re such a cool friend. I’ve got to introduce you to somebody.”

Now her mind is like, “He’s been calling me ‘sexy’ and we have this vibe. And now he says I’m just a friend?”

That uncertainty is addictive for a woman. It’s creates a mental challenge.

Any time you introduce a challenge, you get her attention.

If you’ve ever had things going well with a woman and then she throws in that word “friend,” but she’s flirting and sending mixed signals, it draws you in. It makes you wonder, “What’s going on here?”

If it works on you, it will work on her. It brings out her instinct to chase you.

3 Phrases That Make a Girl Chase You

Doing favors, showing your compatibility, and being the nice guy will never work.

These subtle and innocent words are way more effective. They elicit a woman’s instinct to feel desire for you.

When you understand why these words work, you start to understand other words that fulfill these same principles.

You’ll start thinking, “What are other things I can say that are going to trigger this instinct in her to chase me?”

I gave you five here, but if you want more examples, Rob Judge put together a PDF with 66 words that he consciously brings into conversations.

You can buy it at this link and start experimenting with turning women on.