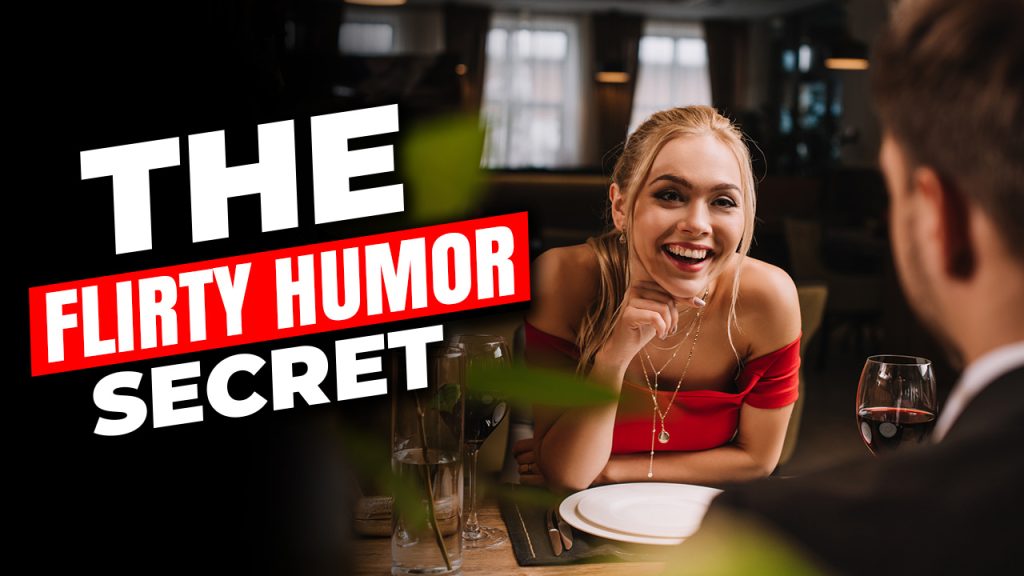 There’s a major misconception that has kept guys from getting laid for years.

We all know that women love “men who can make them laugh”. In fact, women’s magazines often rank humor THE most attractive quality in a man.

The Myth of Attractive Humor to Flirt

However, the misconception lies in understanding attractive humor.

Most guys mistake humor for comedy, believing that if you can’t tell jokes or perform a standup routine that you’re doomed to forever be unfunny around women.

This couldn’t be further from the truth.

In fact, “comedy” is almost something entirely different from cultivating the ability to “make women laugh” while flirting with her.

You’re probably wondering: How so?

In an attempt to keep things simple, let’s hit the bullet points.

On the other hand…

Becoming even a mediocre comedian can take a lifetime, whereas becoming good at making women laugh is much, much easier.

Hopefully you understand the stark difference between comedy and getting women to laugh, and so you’re getting over your doubts and insecurities about “not being funny enough.”

In case you’re still having trouble grasping this, let me just say it again: getting women to laugh is NOT about jokes!

In fact, if you try to use traditional jokes or monologue comedy routines to get women laughing while you flirt with her, you’re probably not only going to fail at getting her laughing, you’re also going to come across as supplicating and try-hard.

Even guys who can tell funny jokes often don’t come across as attractive (probably you know a guy who’s “hilarious” yet women just don’t seem to like.)

Conversely, you’ve probably seen a guy who can get away with saying absolute stupidity to women, and yet women seem to soak up every word he says.

They’re erupting into laughing fits before he even finishes his sentences.

These sorts of guys understand how to use tension, understand women’s emotional triggers, and add a dash of unpredictability to whatever they say.

It’s all well and good to expound upon the theory of laughter, yet theory never made anyone laugh, and especially not a woman!

Thus, let’s look at some ways to translate theory into practice.

First off, to create tension first requires that you’re comfortable with that tension.

For example, would you be comfortable walking up to a girl you don’t know and saying, “I hate you?”

If the idea makes you uncomfortable, then you probably need to work on your “social tension muscle” a bit more.

However, if you feel pretty confident that you can strut over to an attractive girl you’ve never met and tell her that you hate her, you’re off to a good start.

Naturally, the girl will probably react in a surprised and/or negative way.

That’s what you want.

Getting a Girl to Laugh Requires Unpredictability

Keep in mind: getting women to laugh require a degree of unpredictability.

Therefore, once you tell her that you hate her, you immediately want to say something unexpected.

You might say, “Because you wore that black dress you know I love” or “Because when you get all dolled up like this, I have no choice but to hit on you shamelessly.”

Basically, you want to say something she’s not expecting, and reverses the emotion she felt when you told her you hated her.

Keep in mind, this just an example, and not even a particularly funny one.

Yet, I chose it because I hope you see how “unfunny” getting women laughing can be.

You don’t need to be a Chris Rock to get her giggling.

Simply understand the “theory” behind getting women giggling as you flirt with her, and don’t be afraid to get your hands a little dirty.

In other words, leave yourself plenty of room to fail.

Don’t think you’re going to get this the first time you attempt it. Simply begin getting yourself comfortable during moments of tension. From there, you’ll begin to develop a “feel” for how to get women laughing.

Now get out there and attract some girls with your sense of flirting humor!