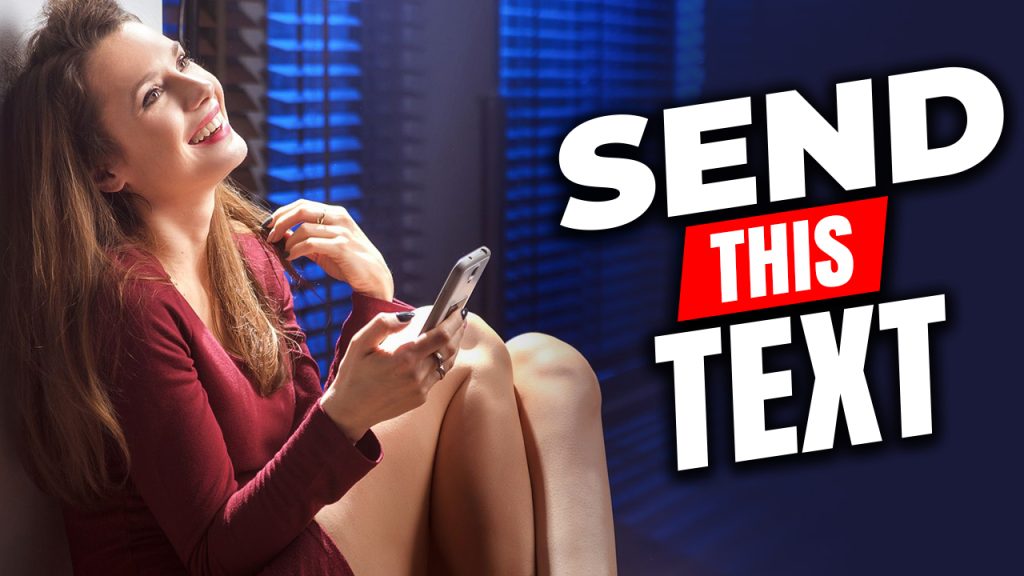 This (not Perverted) Message-Reveals How DTF She Really Is

Not going to lie: it’s a damn good time to be a single guy!

Dating apps like tinder and Bumble have made meeting women so much easier while social media and texting has made getting to know those women so much less awkward.

These days, the first time you actually have to talk to a beautiful woman (as in, like, with your voice) only happens after she’s decided she likes you enough to meet you for a first date.

Better yet, the stigma that once hung over casual sex like a shameful black cloud seems more and more old fashioned by the day.

Women have become comfortable expressing (ahem, enjoying) their sexuality however they want thanks to the likes of Sex and the City and 50 Shades of Grey. (Oh yeah and decades of social reform as well as the scientific discovery that led to effective birth control may have played a part, as well!)

Damn good as things may be, there’s still a catch.

The line separating “sexy” and “creepy” has become razor-thin!

All it takes to become a creature from Creeperville is one wrong text, one stupid comment, or even just one ill-planned move.

We both know: if a girl feels “creeped out,” you’ re out, and there’s no way back in.

Any guy looking to date with intentions that are both good and casual has been there! And while there are plenty of beautiful women looking for the exact same thing, not all women are looking for the same thing.

So How do Tell if a Woman is Looking for Sex?

How do you determine which women are sexually open and which are more reserved or looking for more of a commitment first?

The answer to that question is, to quote President Trump?YUGE!

Answer it right, you can make your sex life great (again).

Answer wrong and it’s going to seem as if there’s a giant wall separating you from womankind. (And by the way, you’re paying for that wall!)

So, how would you respond if you found yourself on a bus, with the president, hot mics on, and he asked:

If your answer is anything other than D, you?re getting deported to Creeperville.

Now, before I reveal why the correct answer is something I haven’t yet told you, let me first tell you why the other answers are wrong:

Asking such a question ensures her answer will be NO (even if it was “yes).

B) Find something you can use to stereotype her (e.g., how she dresses): Take it from a guy who’s been aggressively dating for well over a decade: there is no way to determine if a woman is sexually open (generally), and especially not with you (specifically), based on how she’s dressed, whether or not she has tattoos, or anything else about her appearance you think confirms or refutes how you believe she regards sex.

Even if you think you’ve found the “telltale” sign, there will always be exceptions.

C) Check if she has “not here for hookups” in her tinder profile: Some girls who say “not here for hookups” actually mean it; others mean it about as much as when a girl invites you back to her place and says, “but don’t think that means we’re having sex!” (Usually followed by her asking if you have a condom “just in case”)

Alright, now that you know what not to do (read: basically everything every other guy does to see if a girl’s DTF).

Let me show you THE MESSAGE (definitive and singular!) I send to see how DTF a girl with whom I’m messaging may or may not be.

Tinder, Sunday, 8:14pm: Rob’s been messaging back and forth with a cute girl who looks amazing in yoga pants.

Her: That should work!

With numbers exchanged and a date pending, here’s how I’d determine how open or closed she is for first-date sex:

No matter how she responds (and even if she doesn’t respond at all), I can put her in one of three categories:

1. DTF:  She’s (probably) “Down to Fuck” if her response has a lot of (positive) enthusiasm like, “You’re going to make me wait?” or “hahahahahaha then I’m making you wait for my nudes!!!” (both are actual responses I’ve received and hypothesis confirmed: they were DTF).

2. ND:  She’s “Not Down!!” if she goes silent or gets pissed. While I’ve never had a girl object to my “no dick pics before marriage” line, I once asked a cosmologist if she ever bleached ass hair and she responded, “why would you even ask such a question?”

This told me loud and clear: she’s not very down for casual sex (or at least not with me!). And while I still went on a few dates with her, that prediction was later confirmed.

3. DTF@ Some Point: She’s “down to fuck at some point” if she responds, but there’s some hesitation or uneasiness. A simple “haha” or “omg” are the sort of lukewarm responses that tell me she probably likes me, but isn’t (yet) down for what I might have in mind on a “casual” first date.

This is no big deal? I just need to be a bit more aware of her comfortable level and keep my expectations in check. Remember: this doesn’t mean she’s totally not down (!!) She’s just not down YET.

And if she does, chances are she’s ND!! in any way, shape, or form. In that case you just saved yourself some time filtering out a girl you had absolutely no chance with anyway.

While it may cause a minor “hiccup” in the interaction, the reward justifies the risk, at least in my opinion.

That said, in no way is it necessary to determine if a girl is DTF prior to meeting her.

This is especially true if you’ re looking for a girlfriend and/or casual sex isn’t your thing.

I probably only use a message like this half the time myself, and just so I know what to expect. That way, I can better plan our date.

While I don’t want to end on a moral note, I do want to point out that knowing if a girl is DTF usually makes the date better for both you and her.

While my “one-message DTF test” might seem offensive or creepy to some (i.e., all women), you what’s FAR MORE offensive and creepy “NOT knowing if a girl is DTF” and doing something that makes her totally uncomfortable!

Don’t be that creep; instead use my playful (dare I say: gentlemanly) message.

Do it for her pleasure.