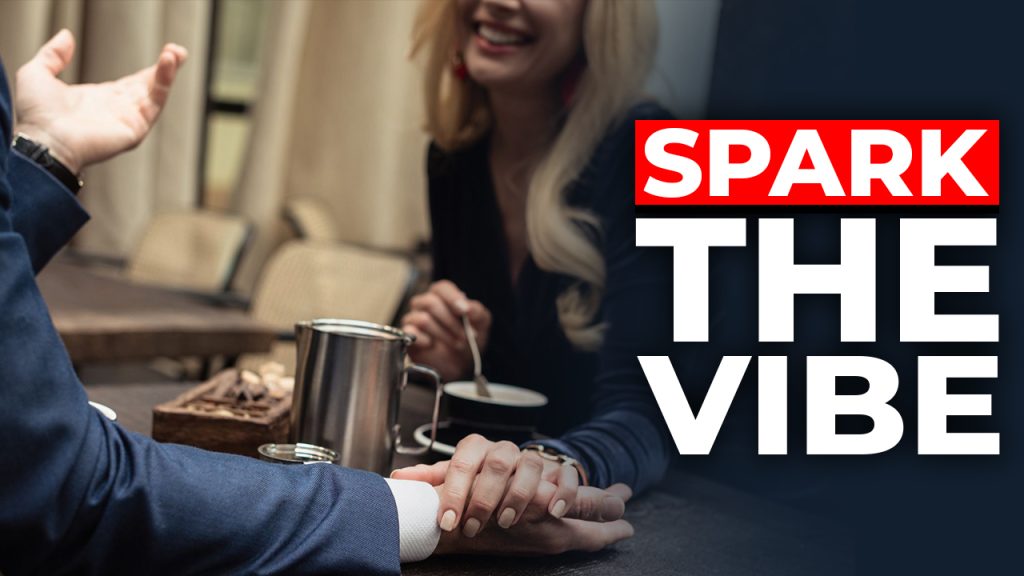 The Importance of Vibing

This is known as social intelligence.

Socially adapt people can tell if someone is mad, happy, psychotic, etc. simply by reading their non-verbal sub-communications (in other words, reading a vibe). Awareness of the cues women give off tells a guy what he needs to do to move an interaction forward.

Socializing and flirting trains your awareness of these cues and hones your ability to interpret and respond appropriately.

After a while, you become socially savvy.

A social savvy guy “flies above his emotions.” Most guys base how they communicate on their feelings or an emotional response.

For example, sometimes guys argue just for the sake of being right. Men get obsessed with “winning” an argument, so they succumb to their emotions and keep arguing as they try to force an outcome.

Is What I’m Saying Moving Me Toward or Away from the “Vibe”?

While arguing is an obvious example, succumbing to an emotional response can be very, very subtle. Sometimes things sneak under the radar, so you should always ask yourself:

Is what I’m doing bringing me closer to this girl?

Will this bring about the best possible outcome?

When you ask yourself these types of questions, you connect with people through tactical communication. You’ll succeed far more with women if you stop trying to be right and start aiming for what brings the best possible outcome.

If a girl is yelling at you, the vibe is not working to bring you and her together. It’s crucial to read the cues and exercise assertiveness to set a vibe that brings you and the girl together. Always act in a manner that is in alignment with the best possible outcome.

Example explained: Rather than react to a negative response, the socially savvy guy instantly channels the girl’s negativity into a playful joke that establishes rapport between two strangers.

The vibe instantly changes and is now conducive to success.

You can hijack the vibe and bring it around to one that is more fun and positive.

Everyone appreciates someone that can take negative emotions and make them positive. By reading cues and flying above your emotions, you can learn to become a tactical communicator.

How to Assert a Vibe

Imposing your vibe is the culmination of everything it means to be man.

To impose a vibe, you must incorporate elements of:

Eventually, imposing your vibe becomes an unconscious expression of your confidence.

However, when learning how to vibe, there are techniques you can do consciously to impose your vibe. Even the most socially savvy guys are a mix of BEING and DOING, therefore no matter how unconscious some techniques become, you will always have to DO something.

Furthermore, if you’re already getting great results with women, there may be some things you can DO to get even better results.

Here are a few techniques to implement:

#1: Vibing with Statements and questions

Certain statements and questions impose a vibe by forcing people to explain themselves to you. By putting a person on the back foot, you can direct (or redirect) the vibe to where you want it to go.

Having a few good statements and questions ready on tap ensures you remain the vibe’s puppet master.  Unless you’re talking to the rock band Metallica, in which case they are the original master of puppets. You know, the ones pulling your strings, twisting your mind, smashing your dreams.

Masculine energy builds, conquers, and destroys whereas feminine energy nurtures, generates, and creates. The two energies complement one another. You are capable of expressing both assertive (masculine) and creative (feminine) traits. However, when imposing a vibe, you must consciously channel your masculine energy. Assertive masculine energy elicits a submissive response in others.

#3: Vibing with Your Vocal Tonality

To impose your reality, address others in a tone of authority. Make statements and ask questions in an expressive but dominant way. Get them explaining themselves to you, the puppet master.

At the very least, there should be absolutely no squeakiness in your voice, sounding as if you end each sentence with a tentative voice. You’re not seeking approval, assume you’re talking to people like friends you have known forever.

Projecting your voice is key!

Feel the resonance of it from your chest. Speak from your belly and diaphragm, projecting your voice upward as you speak. When talking to face-to-face with a woman, talk as if she’s actually 10 feet away

#4: Vibing in the Way You Touch

If you want to stop the girl of your dreams as she walks past, you should grab her and pull her in LIKE YOU MEAN IT.

This is the same if you are tapping a girl on the shoulder to get her attention. The tap should not be soft and feminine, but assertive and masculine.

Don’t be a he-bitch! MAN UP

Masculine assertiveness is most obvious when a girl is not even looking at you (e.g. you are waiting behind her to get a drink at the bar). The tonality of your voice and the way you touch tells her whether you are indeed an attractive man or just another he-bitch.

If your tonality or touch is off-point, you’ll find women don’t turn around when you talk to them, or even acknowledge you tapping them on the shoulder in the club.

Reading cues and creating a vibe are fundamental social skills that make all the difference when interacting with women. Even if you?re already very good with women, you might want to keep some of these tips in mind the next time you see that incredible girl walk by.