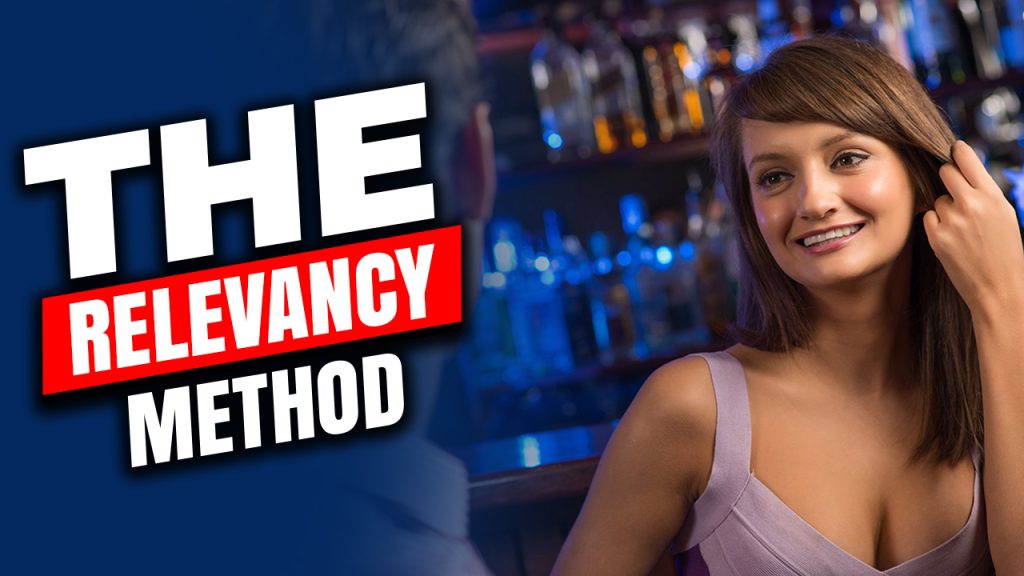 Things to Say to a Girl (Explained)

There are many nuances of conversation, but one of the most important ones is being able to take material you’re given and flush it out into full conversations.  So I’m going to explain what to talk about with girls.

This requires a skill called “threadcutting”.  Which is the ability to move from topic to topic with a girl.

With the ability to “threadcut” you can:

It is, quite simply, mastery over conversation.

Master conversationalists innately understand the concept of “Situational Relevance” – that’s being relevant to the situation at hand.

The easiest way to understand “Situational Relevance” is through what happens when a guy isn’t situationally relevant when talking to a woman.

This can be used to your advantage.

#2: How to Generate Infinite Conversation Material

The classical example is:

Isolate every meaningful word in the sentence.

Any sentence using one of those words or phrases – with the meaning of the word unchanged – will sound relevant to the situation.

So below are some ways you can take any of the words above, and turn it into something to say to a girl.

“Yeah I don’t really like the cold… I love the seasons in New England, but I’m just about ready to move to Los Angeles so it’s never cold.”

“Oh really? I got caught in the record blizzard last year… it was funny, it was on a Wednesday I think, but I actually had the day off. So when I went outside, there were these huge piles of snow on either side of the road, but the roads and sidewalks were clear.”

“Wow, I like getting and staying warm. I remember when I was a kid, I had the biggest, heaviest blanket – ever. It was a gigantic heavy blue blanket with a picture of a mean looking grizzly bear on it. Loved that thing…”

“That’s cool… yeah, I actually messed up. I was cleaning out my closet and gave a lot of stuff to the Salvation Army, but I didn’t realize just how much of my winter stuff I gave away. When it started getting cold, I actually had to use like Fall clothing and layer it a lot.”

Endless Examples of What to Talk About with Girls

If it’s really out there, you use a few transition words like:

This shows that you’re acknowledging what they’re saying, and then moving on to do more.

In addition to the words and phrases used in conversation, you can also employ “overarching themes” – these are elements that aren’t directly said, but are implied by the conversation.

Any of those could be used to create a new sentence as well, via the same thread cutting format.

Some Examples of Thematically Relevant Conversation

So below are some ways you can take any of the words above, and turn it into something to say to a girl.

“Yeah, the weather here is crazy… I’m never sure what it’s going to be one day to the next, but I love being able to make the best of it and go for a quick hike, or skiing, or building a snowman one random day.”

“It’s so much fun to act like a kid… just the other day, I was driving with my friend, and we saw this big, beautiful, green grassy hill, and we totally stopped, pulled over, ran up to the top, and rolled down it. Most fun I’ve had in a real long time.”

“I absolutely love a great hot drink. My favorite is chai tea, with just tons and tons of cinnamon in it.”

Are you starting to see how easy it is to find what to talk about with girls?

When and How to Use the Force

Use threadcutting when you’re bored with or don’t enjoy a conversational topic, something is going stale, or isn’t conducive to a great interaction.

If the topic becomes too serious, too sad, or too tense for your tastes, take one word or theme from the last sentence she said, and flip it into a new sentence via threadcutting.

Don’t worry about conversations logically flowing when you’re first meeting new women: instead, focus on moving through a wide variety of fun topics and connecting on new and interesting things.

With a great grasp of threadcutting, you’ll be able to vibe your way through conversations.

The Golden Triangle of Attraction: What to Say to Make a Girl Chase You