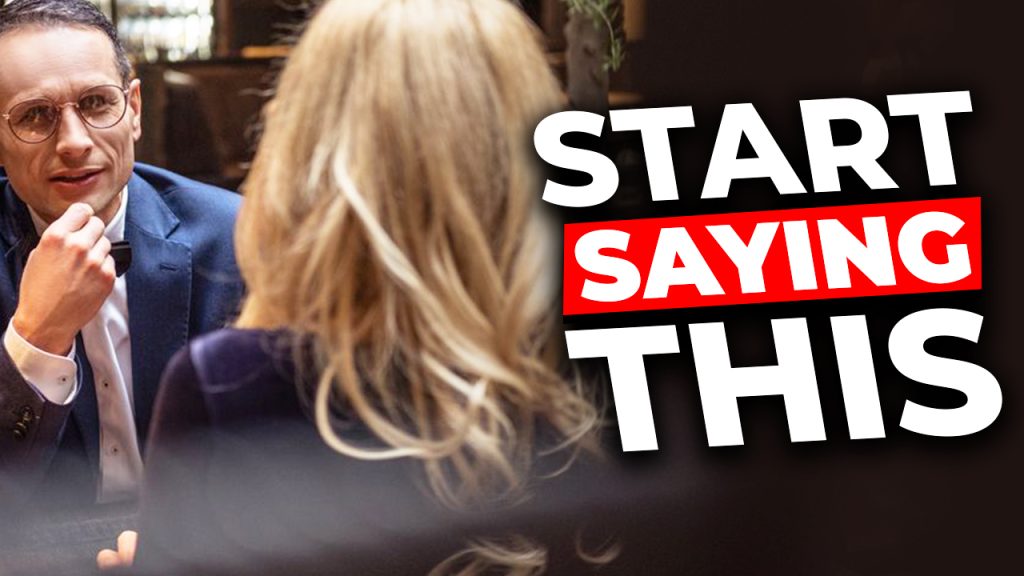 The Best Things to Say on a First Date

Have you been stuck in the half-hour conversation to nowhere?

Its arguably worse than getting instantly blown out…

On the other hand, have you ever been in a conversation where there is an amazing vibe between you and a woman?

You feel an instant connection – and couldn’t be more confident that this woman will be down for a date in the future.

Then, out of nowhere, she makes her excuses and leaves.

She smiles and says “nice to meet you” as she strolls out of your life forever, leaving you wondering what you did wrong.

More often than not, it probably was a “nice” conversation – but it did nothing to make her see you as a potential lover.

If you don’t bring up the correct conversation topics, you’ll end up in conversations like this every time you meet a beautiful woman.

You’ll have way too many dates where she “didn’t feel the spark” and be fighting to get out of the friend zone far more often than you need to be.

If you’ve been scrolling the web for advice on things to say to a woman, you’ll probably have already heard that it’s not what you say, it’s the way you say it.

This is absolutely true.

Your vibe, body language and voice tonality communicate so much more about you than the words coming out your mouth.

Once you realize this, it’s a life-changing moment. You never have to worry about ‘running out of things to say’ again?

But what if you haven’t realized this yet?

In this situation, it would make sense that you’re after an actual list of things to talk about on a date.

18 Things You Can Say on a Date

If you’re ever in front of a woman, and struggling for what to say. Below are 14 ideas for things you could say.

There are 18 things to say on a date which can help present you as an attractive male, rather than a nice little chit-chat buddy. These are conversations to start the next time you’re chatting with a beautiful woman.

I also recommend combining them together, for endless conversation.

Topic #1. Anything that beings with ‘we’

Maybe it’s an observation. “Wow, we both like strong beer. That’s a bad sign.”
Maybe it’s speculation. “We are not going to get along.”
Maybe it’s future plans. “We should go and visit my dog after these drinks.”

The whole idea is that you’re beginning to shine the spotlight of the conversation on the two of you.  This is one of the big secrets to chemistry with women.

Tales from your past help her to feel more comfortable around you.

Tell a personal story you wouldn’t normally mention to stranger. This helps to build an emotional connection. It convinces her she’s not just the “next hot girl” in your eyes – and separates you from every other random dude she just met.

The best stories are the ones that show vulnerability, or tales that helped to shape your personality.

Maybe it’s something you loved to do with your parents, or that one thing that terrified you as a child. Anything that helps her get to know you better will work wonders.

Once again, explain your emotions during the story. This is key with all seven conversation topics…

Once you’re done, try and get her to share a similar story. It’ll help her feel even more invested in you.

The concept of “demonstrating higher value” was popularized by Mystery – the famous pick-up artist who introduced “peacocking” and attraction-building routines like “The Cube” to the mainstream world.

Although the these two techniques are ridiculed in the present day, DHVs remain as powerful as ever when utilied correctly.

If you can subtly pepper in clues about your high status into your conversations, it’ll help her feel attracted to you. Subtlety is the key here. Without this, DHVs come across as arrogant, boastful and try-hard.

Topic #4. An Assumption, Opinion or Observation About Her

Yes, you could ask boring interview style questions – Where are you from, what do you do, do you come here often? – but assumptions make this seem less like an interview or an interrogation.

People love to talk about themselves. If you ask a woman a question about herself, she may rabbit on and on, making you feel like the conversation is going brilliantly.

The problem is she doesn’t see you as any different to anyone else who has asked that same question.

The key to differentiating yourself is to give an opinion on her answer, based on your experience of life. Now, you’re discussing her favorite conversation topic but offering unique insight.

That’s compelling and will give her more motivation to see you again.

Instead of asking questions, you can simply comment on anything she’s wearing. Offer your opinion on what it says about her.

If you can speak about sex in a casual and non-crude way, it demonstrates you’re aware it isn’t a big deal. It shows you’re comfortable with your sexuality and you don’t judge women who jump into bed with new men.

The subconscious message you’re sending is that you probably have a lot of sex – and that you won’t turn into that creep who falls in love and sends her dozens of text messages if she sleeps with you.

Teasing her shows you’re comfortable around her and not intimidated by her beauty. Light-heartedly decide some undesirable personality quality she has (messy, ditzy, bitchy, stuck up) then make assumptions or call her out on this. It’s usually best to pick a quality she clearly doesn’t have.

If you’re stuck in a platonic level with a girl, and want to start to flirt with her, teasing is the easiest way to brings things to a flirtatious level.

Topic #7. Anything You’re Passionate About

A passionate male will always appear attractive, no matter what interests him. If you can demonstrate excitement and emotion when talking about your hobbies, it shows a lust for life that’ll draw her into your world. It’s an emotion she’ll want to bask in again and again.

Explain how it makes you feel when you’re engaging in your passion.

Women love when men talk about their emotions. If you’re working on a plan to make a living out of it, talk about that too. This shows drive and determination; these are personality traits she’s likely to find very attractive.

Talk about your passions. If you speak about any topic with enough enthusiasm, it’s possible to draw people in. Women want to see that you have a passion for something.

Tell her what you look for in a perfect woman.

Once again, this shows you’re proud of your sexuality – and also that you won’t just date any bimbo with a pretty face and decent boobs.

Ideally, it’ll result in her selling her best qualities to you. This puts you in a brilliant position when it comes to seeing her again. Women prefer to date a man they had to work for.

A lot of shy guys are scared to show their intent, leaving women confused as to whether they’re on a date at all.

Don’t be afraid to compliment anything you like about her appearance.

The most common conversational tip is LISTEN. She’ll offer conversational branches for you to swing from all the time.  Very often if pay attention, you’ll find that there are dozens of different threads you can create out of her sentence.

For instance, if she’s telling you a story about her boss, you can transition into a story about the worst boss you ever had back when you were in high school.

It sounds obvious, but if you’re too stuck in your head thinking of things to say, you might not listen properly.

Topic #11. Moving the Conversation into the Past or the Future

Whenever a conversation is stuck in the present moment, it’s seconds away from dying. By moving it into the past or future, it can live forever.

For example, if she says: “This cocktail is tasty.”

You could go into the past…

“I bet you never used to drink cocktails, but then you met your classy friends and started drinking them.”

“I can already picture what you’re going to look like if you have one more of those.”

Both options beat remaining in the present

It’s good to have a pre-prepared excuse for the two of you to go home together. Mention this excuse before you’re ready to leave, so it’s not a big surprise when you bring it up again later.

For instance, if you have an adorable dog back at your place, you can talk about him for a bit, and make a comment about how she’s going to fall in love with him instantly when she meets him.

If she laughed at something when you’d previously met, bring it up again.

Topic #14. Show Her Your memes or Take Stupid Dog-Ears Selfies

If you’re dating a millennial, she’ll probably love it.

So many guys make the mistakes of being sold on a woman just because she’s hot. This is boring and predictable for a woman as it leaves no space for her to chase.
Don’t be that guy.

Instead, decide what personality traits your ideal woman should have, then ask questions (or make assumptions) that’ll help you find out if she has them.

If you trying to pull her home, this needs to be done at some point. Where does she live? What does she have planned for the rest of the day? What is she doing in the morning?

The best way to avoid “conversations to nowhere” is to make future plans. If possible, make plans for the immediate future.

This could be getting a drink at the bar together, grabbing some food or taking a cab back to your house. Whatever you suggest, it shows you have leadership abilities and that you’re spontaneous. These are two very attractive qualities. Too many men don’t do this because they’re scared that a rejection will ruin the pleasant conversation.

If she’s unable to go anywhere with you immediately, exchange phone numbers and arrange an activity to do another time.

The fact you have the balls to do this, rather than let the conversation peter out to the inevitable “nice to meet you”, is attractive in itself.

Topic #18. That Outrageous Joke in Your Head

If there’s a joke you’d tell in front of your buddies, make it here.

There’s no point filtering your true personality just because she’s beautiful. Women hate being put on pedestal like this.

For all you know, she has a dorky sense of humor too. Most people do – and having the social freedom to tell these jokes can be attractive. It beats being bland.

The Golden Triangle: 3 Elements of an Attractive Conversation

How to Bring up These Things to Say on a Date

Men are very logical-minded. Many think that the conversation needs to lead up to a certain topic for it to make sense.

Women don’t care about this though. Seriously, listen in on any female chatting with her best friend. The topic changes more times than the hands on a clock.

Just say “I want to talk about” and go right ahead.

If you can pair these things to say on a date with strong body language and basic flirting, you’ll be on to a winner.

The bottom line on Things to Say on a Date

However, it remains true that the most important thing is to speak with confidence and assertiveness.

If you believe what you have to say is awesome, she’ll typically feel the same way.

Once you’re at this point, you really can get away with most conversation topics.